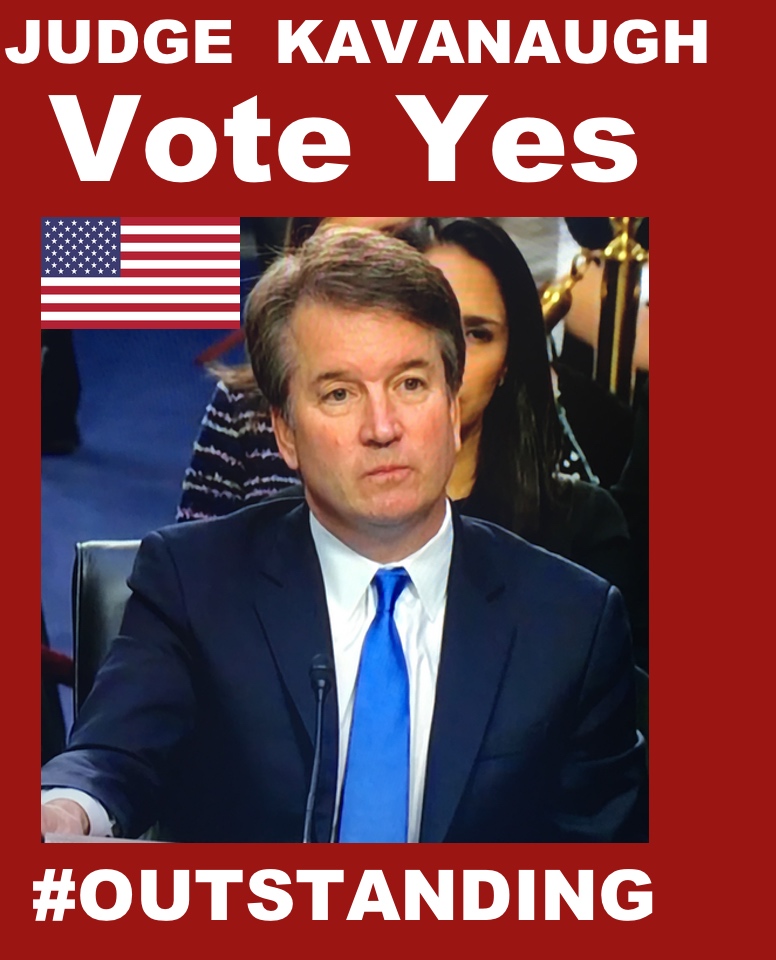 What a day of history in the American Congress, learning about the process of Judge Brett Kavanaugh who spent twelve hours in the Senate Judiciary Committee confirmation hearing Wednesday, September 5th, 2018.

One might forget how important this role is — a thank you to President Donald J Trump with his strong leadership and talent who has picked an outstanding Judge, Brett Kavanaugh for this important position — one begins to see the supernatural power that goes beyond our human mindset.

Listening to the insulting slurs and disruption of the people in the room it seems obvious the people were let out of a mental health institution for the day and were paid money to make these screaming remarks that were hateful. The fear in many of the senators’ questions was clear. They had a one-track focus on attacks, with hostility, sternness and hypocrisy. We clearly see this is an extension of the threat they have against our President Donald J Trump. The staging in the room did not affect the audience and the viewers; we were all impressed with the strength and consistency of Judge Kavenaugh. It showed us all how much our President was chosen for this role. HallelujahTrump2020.

Judge Brett Kavanaugh was very impressive. As a judge he knows the law and with the highest office one sees it is not about emotions, it is not personal, it is about the process and knowing the United States of America constitution laws. We as Americans must be proud to learn from this brilliant Judge Kavanaugh, who understands the cases of many of the judges he respects and what they have done. He has written many cases and is an American who is so impressive. His communication and steadfastness is stellar.  Judge Brett Kavanaugh understands the law, he is wise, he is faithful and one will say he is anointed and has been trained to serve on the bench. HallelujahTrump2020

It appears that many of the people, especially people of diversity, are worried about racism and so afraid that this is something high on their minds and many of them continue to sell fear in their communities. Many of these people are spreading rumors about Judge Kavanaugh and saying he is unfriendly to the LGBT community. Judge Kavanaugh was never involved in any cases in which he had to deal with LGBT issues. Judge Kavanaugh is kind. Jealousy is evil and it causes envy and division.  When you have a brilliance and genius like Judge Kavanaugh, you have to stop and say Hallelujah. Thank you America, we must say Judge Kavanaugh has stamina, patience and it is so clear the Lord shines through him.

Judge Brett Kavanaugh captivated all of us making it clear he is an independent judge who follows the process, believes in the Constitution and is well respected by many. Watching him made all of us feel connected to him more. It is a day of gratitude to know we have someone who will be serving on the highest court on behalf of America. This is the only country that follows the constitution laws of America and with 7.5 billion people around the world everyone wants to be here in the United States of America. As a business owner and a woman, what an honor and privilege to watch and to support our country and President Donald J Trump. Many people are afraid of the voting system. Choosing Judge Brett Kavanaugh is a win for America and is Making America Great and Safe Again.  Keep the Faith. Many showed biases about our President Donald J Trump and we clearly see and understand that the people who discriminate in their community need to be educated and not have these biases.

Watching this confirmation hearing, the country walked away knowing that it is about doing the right thing and knowing the law.

Judge Kavanaugh is an outstanding judge whose confidence speaks volumes about this 53 year young judge who will be on the highest court for life and has credited his mother several times for her teaching.

People will see we have a highly qualified Judge Kavanaugh. He is brilliant. He is a superstar. He is handsome. He is a dad. He is a husband. Overall, Praise The Lord for our Champion and Winner President Donald J Trump for his outstanding choice and nomination of Judge Kavanaugh for the Supreme Court.

As a naturalized American citizen where education is key and knowing it is not about color, it is about the truth, believing that America is blessed by God. Make America Great Again. Keep America Great. Let us continue to pray for our country and Make it Safe Again. Go out and Vote November 6th, 2018 Republican and Conservative.